How will corona change our economies

One of the most used phrases these days is that the world after Corona will be a different one than before. Is this true also for our global economy and in what respect? Many new developments are still in the making, but for investors it is important to build a view early on. Some of the changes on the supply and the demand side will dampen long-term growth and prosperity, there will be some de-globalization and we are likely to remain in a non-inflationary environment with very low interest rates and expansionary monetary policies. That will reactivate strong upward cycle of risk assets. 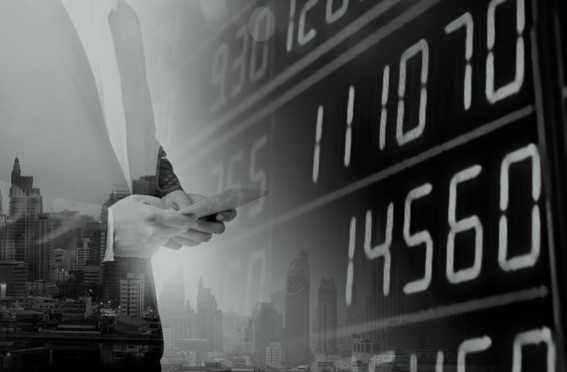 Changes in demand and supply

The Corona crisis is likely to change private demand in different areas. Business travel and private travel could become less for some years to come, home office activity and the use of technology will increase, local production may further benefit in the eyes of the consumer, mass events are likely to become less attractive while spending for health and hygiene products is likely to rise. Whether such types of changes will be permanent or transitory, remains to be seen. Of course, behavior may again change substantially if e.g. a safe vaccination is developed. Therefore, it is difficult to say exactly what will be visible repercussions of todays pandemic say in ten years time. But for the time being the driving forces of change seem to be rather strong. The crisis has sharpened the recognition of services and products that are really essential for our well-being. Hedonistic consumer behavior might be in decline at least for some time to come.

On the corporate side, there are likely to be significant changes as well. Companies will be more open to remote working and flexible time arrangements; not least because it will reduce the need for office space. There will be a drive to increase corporate resilience by reducing dependency on long cross-border supply chains or holding higher inventories, even if that means sacrificing some efficiency and short-term profit. Also, companies will attempt to strengthen balance sheets that have been put under massive strain by the shutdown and the corresponding business losses. That will in many cases imply some deleveraging and rebuilding depleted cash balances. Investment will be lower for some time and efforts to save costs will be strong.

The structure of the corporate sector is likely to change in many countries. In areas where demand can be assumed to be lower for a significant period of time (possibly in air and ship travel, in tourism and mass event entertainment) there will be retrenchment and consolidation; in areas where demand can be assumed to be rising post corona (probably e-commerce, technological equipment and digital communication tools for remote working, streaming services) there will be more investment and a need for financing growth and innovation. Such changes are already taking shape. The airline industry, e.g., which has been in an intense and partly ruinous competition for some time, has started with harsh adjustment measures, like closing down discount carriers or negotiating government capital injections. Such changes do not address temporary demand weaknesses, but long term structural change. Not only in the airlines business, but basically across all sectors of the economy, there will be companies struggling to recover and to heal after the shutdown period. Even viable companies will come out of the crisis with a lot more debt, if only due to government rescue loans. And formerly unprofitable businesses will face even bigger challenges. Despite further forbearance by banks and central banks, some “zombie companies” whose Earnings (Ebit) were too low to cover their interest expenses even before the Corona crisis, will fail. There will be “survival of the fittest” and industrial consolidation on a broader scale. Where business is expanding, e.g. in medical services or telecommunications, Mergers and Acquisitions will be focused on growth and profitability, jobs and wages will rise.

Part of the government reaction to the crisis will be directed at protecting homeland production in sectors that are deemed critical. Pharmaceuticals, medical equipment and health products.are obvious examples. But many other areas like digital technologies or automatization technologies might qualify. In general, takeover rules will at least temporarily be tightened in many countries in an attempt to protect domestic producers weakened by the shutdown from being taken over by foreign competitors. Policies will have a protectionist spin that will further contribute to slowing world trade and globalization in general. They may make individual economies more resilient, but they will also create some loss of productivity. It remains to be seen however, how long protectionist policy ideas will actually survive. Over the longer run it is likely that the gains to be achieved from an intense division of labor will be recognized again. A mutually benefitial settlement of conflicts in trade and technology issues is actually in the self-interest of the countries involved and there are incentives for policy makers to reap these potential gains. It is unlikely that the world will sink back into the dark ages of protectionism. After all, the pandemic is making clear that cooperation is necessary in todays globalized world.

The recent drive towards more climate friendly production and trade has also created some momentum against globalization. But the debate on climate change has been sidelined by the acute threat of the Corona pandemic which has dictated new short-term priorities for policy makers. It stands to fear that the Corona pandemic may have some negative repercussions for the actions against climate change. While the massive reduction of traffic during the shutdown is an only temporary relief for gashouse emissions, over the longer term, a larger share of the financial resources of the state and the corporate sector might be allocated to other pressing needs: in the corporate sector to the strengthening of highly leveraged balance sheets and the restaffing after a big recession; in the government sector to restarting the economies, to avoiding a surge of defaults, to protecting employment and employees and to improving the health system while at the same time limiting the amount of debt. Between these issues and the protection of the climate, there will be difficult choices to make and there will be no easy way out. The proposal to just make funds available by increasing the taxation of income or of energy consumption or by hiking social security contributions would aggravate the economic problems instead of solving them.

The integration of fiscal and monetary policies

The enormous financial needs of government will mainly be met through higher public debt. Bond issuance will soar. To avoid rising interest rates, central banks will be in the front line and absorb large quantities of government debt via their purchases on secondary markets. That will further raise the liquidity in the economies and lead to large excess reserves of the banking system. Will this finally raise the level of consumer price inflation which – to the disliking of central banks – has been so low for so long ? It could, if there was a surge of growth that went far beyond potential output and creates large production bottlenecks in the economies. This seems quite unlikely for various reasons: There are huge global capacities available, private savings will be substantial after a big recession and pricing pressure will remain high due to strong digitization advances in trade and production. So the outcome of the high money creation is more likely to be similar to the times before the Corona crisis, inflation of risk assets rather than of consumer prices. Of course there can be tipping points that could trigger consumer goods inflation. A lack of confidence in the capability of central banks to preserve the internal and the external stability of a currency could de-anchor inflation expectations. But such a crisis is not in sight. The example of Japans central bank which has been generating huge amounts of liquidity through bond purchases and still enjoys credibility shows that the risk of public distrust in the monetary system can be far out.

There is a lot of debate whether the crisis may unhinge the euro area and a number of its member countries. The argument is that already weak economies (like Italy or Greece) have been hit by the corona crisis and have little fiscal leeway to stabilize and repair their economies. However, as the recent decisions of the EU heads of state have shown, there actually is a lot of solidarity in terms of financial aid available, funds by the European Stability Mechanism (ESM) of over 400 bn Euro in total, by the EU (100bn for employment protection) and the European Investment Bank (25bn for app. 200bn of loan guarantees). On top of that the European Central Bank now has a Pandemic Emergency Purchasing Programme (PEPP) of 750 bn euro that can be directed at stabilizing weaker countries. Should speculation raise its head again, further counter measures could be expected. It is pretty sure that policy makers will not let the virus kill the Eurozone.

What is the long term impact of these changes ? Will the worlds economies, after a policy supported post corona recovery, return to pre-crisis trend growth or will it be lower? One relevant issue is how the expected structural demand and supply shifts may play out. they need not dampen overall growth if policies accept and facilitate such changes as e.g. less travel, more IT-based remote working. In a flexible market economy there should be a balance of winners and losers of structural change, expanding sectors with jobs and income growth next to declining sectors with overcapacity and restructuring. Damage can be done however if policy makers try to circumvent structural change and try to keep alive Zombie companies that do not foster growth and innovation in the economy. This risk is not exaggerated. Having saved many companies in the midst of the recession, governments might tend to perpetuate the bailouts and try to exert their influence for some time to come. Tighter takeover regulation or other instruments of industrial policy could be used..

The main reason for expecting somewhat weaker global growth in the longer run, however, is not structural change but the notion that viable and less viable companies alike will be attempting to rebuild balance sheets and replenish cash-balances. That heralds weak investment demand and fairly high corporate savings once the crisis is overcome. Significant and rising corporate (and presumably also household) savings will be a counterweight to high public deficits (dissaving). In this environment, interest rates will also remain fairly low.

Central bank policies, for sure, will use their instruments to keep bond yields low and to foster the effect of expansionary fiscal policies. However the expansionary effect of macroeconomic policies will peter out over time. Governments will have to reduce expenditures or increase revenue to return to sustainable policies over the longer run. Already today tax increases are being proposed by various interest groups in western societies and by parts of the political spectrum. Tax increases would be highly dangerous in the midst of the Corona recession and are likely to be avoided, but in the long run they will certainly become part of the consolidation programme for public budgets.

So after a presumably strong recovery from the Corona recession, we are likely to face only moderate medium term growth. The good news is that this is likely to prevent a resurgence of inflation. Excess liquidity and very low real interest rates will generate demand for all different types of risk assets and will reactivate the upward cycle on financial markets. Long term investors can take advantage of significant opportunities despite the prospect of only moderate medium term growth. 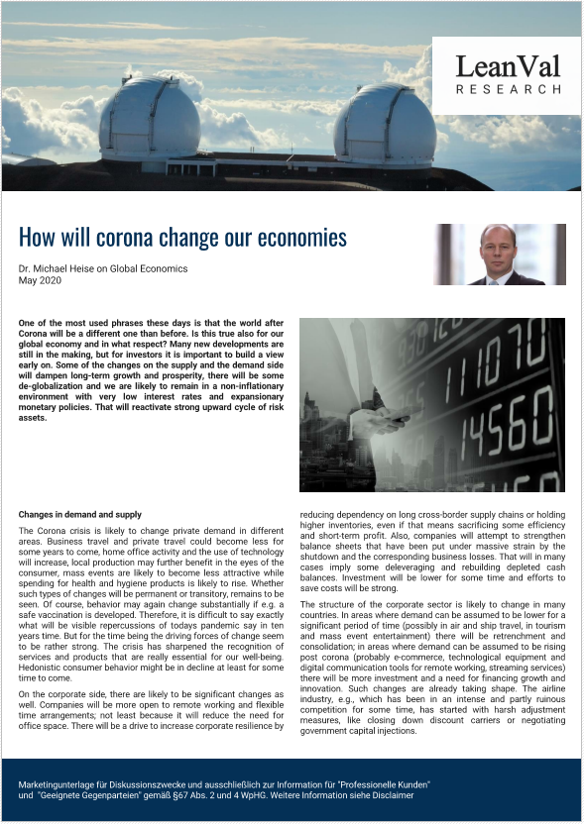